In this post, I’d like to examine how different ways to calcualte Bayes factors (BF) compare with each other for a simple model. This simulation was run on my department’s HPC using the rslurm package: the corresponding R code, data and .Rmd for this post are available.

For this simulation, I generated data of a within-subject model with two levels. The simulation comprised 10,000 iteration per effect size Cohen’s d (0.0, 0.5 and 0.8). Samples of 60 were generated with this function:

The equation of this model can also be written as:

I then compared 4 ways to calculate a BF to examine the mean difference of the two levels.

The reaming four methods are all based on the same brms model.

For the intercept and the beta value, I placed a normal prior, N(0, 1):

The other two methods are based on an approximation of the BF that does not calculate the marginal likelihood but instead the point density at zero for the prior and the posterior distribution, which is known as the Savage-Dickey ratio.

This method by the way also allows to easily calculate the BF for directed hypotheses (i.e. d = 0 vs. d > 0):

See Wagenmakers et al. (2010) for more information on this. This will also examined at the end of this post.

Below you find the scatterplots comparing the different ways of estimating a BF. To aid illustration, the data is presented in natural log-space. Each plot contains up to 10,000 data points. 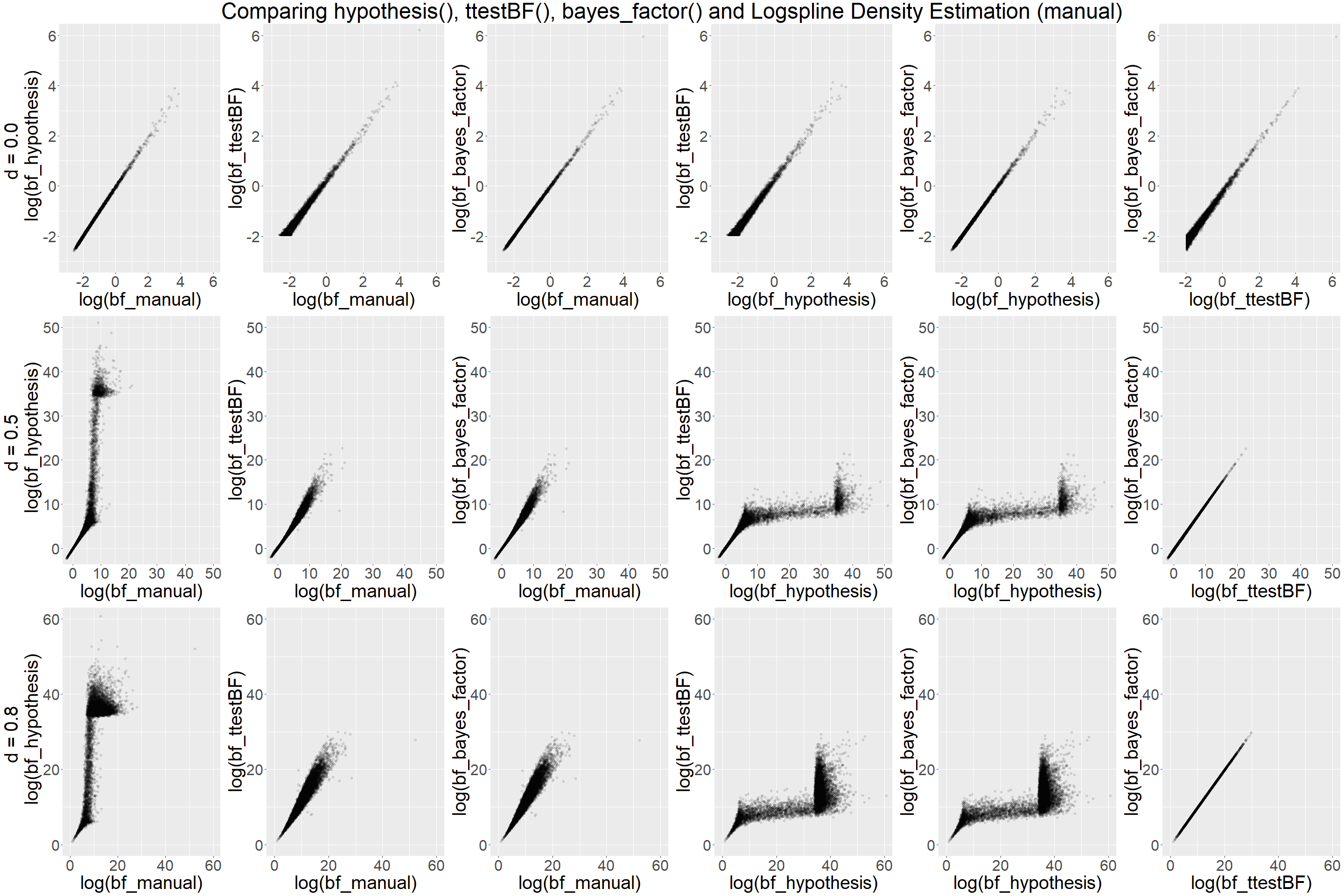 The the scatterplots reveal when d = 0.0 that all methods compare well with each other. In contrast for d = 0.5 and d = 0.8, hypothesis() function starts to break down at around BF10 = exp(5) ≈ 150 and only returns extremely inflated estimates. The manual method via Logspline Density Estimation leads to more stable estimates, while the spread (e.g. manual vs. bayes_factor()) also becomes larger at around BF10 = exp(7) ≈ 1100. However, the estimations are not skewed as the ones returned by hypothesis(). In that sense, the manual method based on Logspline Density Estimation is superior. The reason for that is that hypothesis() does not perform well if the estimation is only based on very few values around zero, which happens when the distribution is shifted away from zero.

As already noted above, there ttestBF() and the brms model have different priors and likelihood functions, but comparison with the BF from ttestBF is still useful to examine if they point in the same general direction and indeed they do. In fact, the correlation for d = 0.5 and d = 0.8 is extremely linear. However, we also see that in the top right corner that for d = 0.0 there is an interesting increasing spread towards low values (e.g. see ttestBF() and bayes_factor()). The reason for this spread reflect the different performance of the methods to produce evidence for H0 (see next section).

All in all, the manual method does a good job with the advantage that it is a lot after than bayes_factor() providing sensible estimates in cases that matter most to use as psychologists/cognitive neurosciences. In most circumstances, it doesn’t really matter if a BF10 is 1500 or only 1100.

To illustrate the difference between brms and ttestBF(), I binned the BF into 8 categories and compared their frequencies. 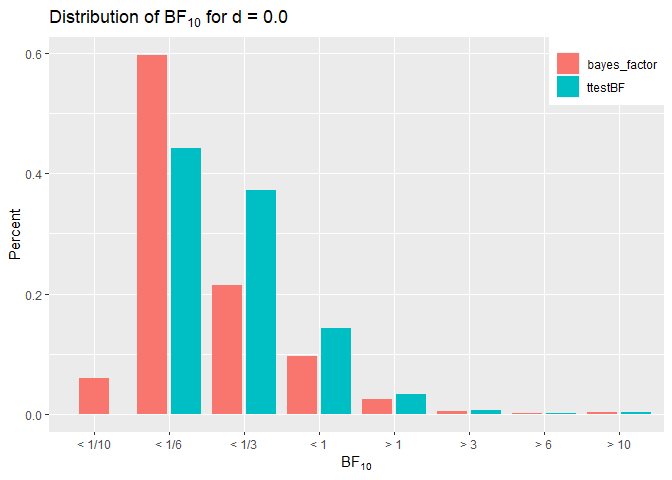 A look at the two distributions shows that the brms model with unit prior of N(0,1) leads to stronger evidence for the null when the null hypothesis is true than ttestBF() with its Cauchy/Jeffrey’s prior implementation does. Zero percent of ttestBF()’s BF10 were < 1/10. This highlights the more conservative nature of the brms model. As a comparison, we can look at the distribution of BF10 when effect size is d = 0.5. 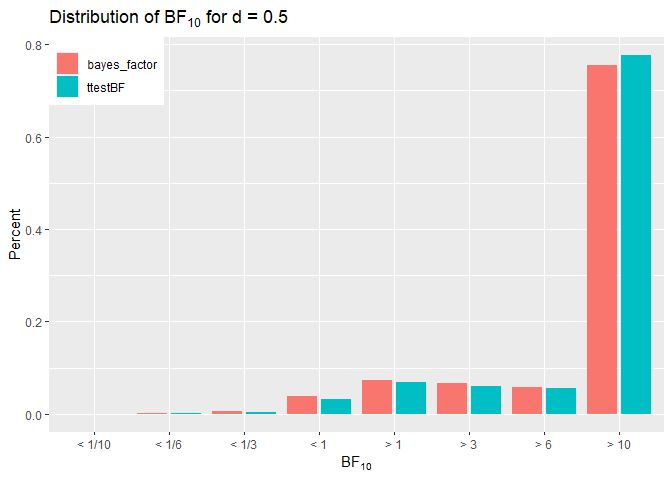 In this case the percentages are very similar despite being more conservative, the bmrs model often leads to the same conclusion. Note that for d = 0.8 all BF10 were above 10, hence they are not displayed here but this illustrated that brms is doing well in these cases as well.

How much more conservative is the bmrs approach?

The conservative nature can be illustrated by examining the distribution of the ratios between both BFs (ttestBF()/bayes_factor()). 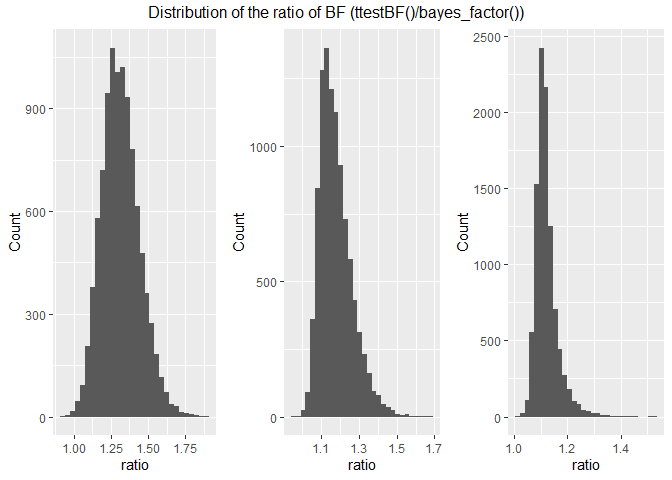 The distributions of ratios show that the brms model more conservative than ttestBF() but as the effect size increase the max ratio drops from 1.8 to 1.4. Median values are 1.308, 1.162 and 1.113 for a d of 0.0, 0.5 and 0.8, respectively. It can be seen that the unit-prior in brms models regularises much more for lower d-values than ttestBF(), which is a good thing if the aim is to provide evidence in favour of the null hypothesis.

On each run in these simulations, I also estimated the order-restricted BF (i.e. BF for directed hypothesis) that d = 0 vs d > 0. 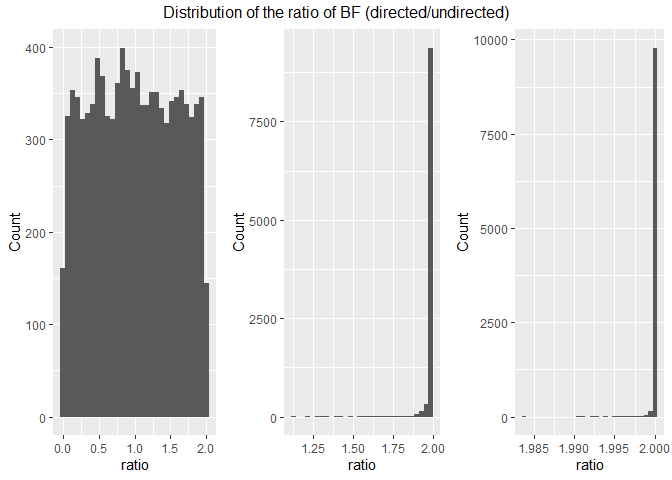 All in all, that simulation showed that the brms model with unit-prior are more conservative than ttestBF() but lead to similar conclusions if d > 0. With respect to the four models, I would that the manual implementation is usually enough as it and easy, quick and intuitive way to calculate a BF. It definitely out performs the hypothesis() function that easily breaks down if the posterior distribution has little overlap with zero. Furthermore, hypothesis() does not work well for priors that are hard to sample e.g. Cauchy prior. This is an issue that has been previously discussed but my tests show that the manual method gives quite reasonable estimates in this scenario.